The world is full of women and men who live quietly and humbly while pushing the limits of their sport.

I remember moving to the Northwest and quickly realizing that under the mossy exterior of the Emerald City lived some of the most talented athletes I'd ever come to meet. Washingtonians seem to never make their accomplishments worth mentioning, simply because they always view their pursuits as "just another weekend in the mountains."

Case in point, hanging out with Reed Johnson. At six feet tall and wearing a t-shirt with a pair of dancing unicorns, Reed doesn't necessarily fit the look of most grade crushing climbers, but more like a young and lanky dirtbag hipster. I met Reed earlier this year while climbing and shooting with a couple other friends at a crag in Mount Vernon, WA. He was hanging on a rope, cleaning a line down the center of the steepest wall, and singing what I think was ABBA or Sheryl Crow. We never really actually introduced ourselves that day, but instead hung out as climbers do: sitting around watching others climb, encouraging (or peanut gallerying) friends on their projects, and talking about the crag, climbs, and beta. I don't think I can explain his personality with justice, but he exudes a chill stoke and unabashed goofiness. By the end of the day, I knew #foshowzies that there was something special about him. His story outlines a free-spirited and adventurous life that parallels Kerouac's On The Road, and instills my faith that the dirtbag life still lives on.

Reed is a tough guy, likes fighting, the sound of a Ford V8 in the morning, and cole slaw wrestling.

Born in Granville, Ohio, Reed lived what he calls "a pretty safe and fun childhood; just normal and I was spoiled rotten." He was introduced to climbing in high school but only stuck to it for a year before he realized that climbing and the "cornfields weren't for me, life on the East Coast just wasn't enough." At 18, he decided to leave his corn fed life and hit the road with his best friend Langston the Dog (whom he found while on a hike) in a vagabond pursuit of the mountains.

Reed's travels initially took him to Anchorage, Alaska where he got his first real job as a cafe cook. He and Langston lived out of his Subaru and slept each night in teenage squalor, "covered with grease from work and onion bits under my fingernails." When he wasn't working, Reed spent his time exploring the local alpine ranges and finding solace at the Mint Hut, one of his favorite places.

Following his time in Alaska, he decided to head south to explore California. Once he arrived (and promptly left) San Francisco, he decided to ditch his car in Santa Cruz and take to hitchhiking from one city to another. After a long chapter that ended with him sharing a can of dog food with Langston, he decided to make way back to his car and set the destination to yet another far end of the country. The following week, he had landed a promising career "flippin' flapjacks for buses full of old folks at an Alabama Cracker Barrel, reading all the books I was supposed to read in high school, picking peas, walking around my yard with a bathrobe, shooting rotten summer squash with a 12 gauge shotgun, and teaching myself how to tattoo."

Six months later, after a not so surprisingly short-lived experience, Reed set his sights for another cross country relocation and hightailed it to the Pacific Northwest. It was then that he picked up climbing again for the first time since high school. Only this time he got the bug.

Now, with just 4.5 years of climbing under his belt, Reed has been busy racking up his tick lists with a slew of 5.13's and .14's. In the last 7 months alone he's snagged the 2nd ascent of Sedona's East Coast Fist Bump, a bold splitter 5.14 finger crack, Idaho's Manhattan Project (5.14),  and the hella-crimpy Voodoo (5.14b) at Washington's Equinox. 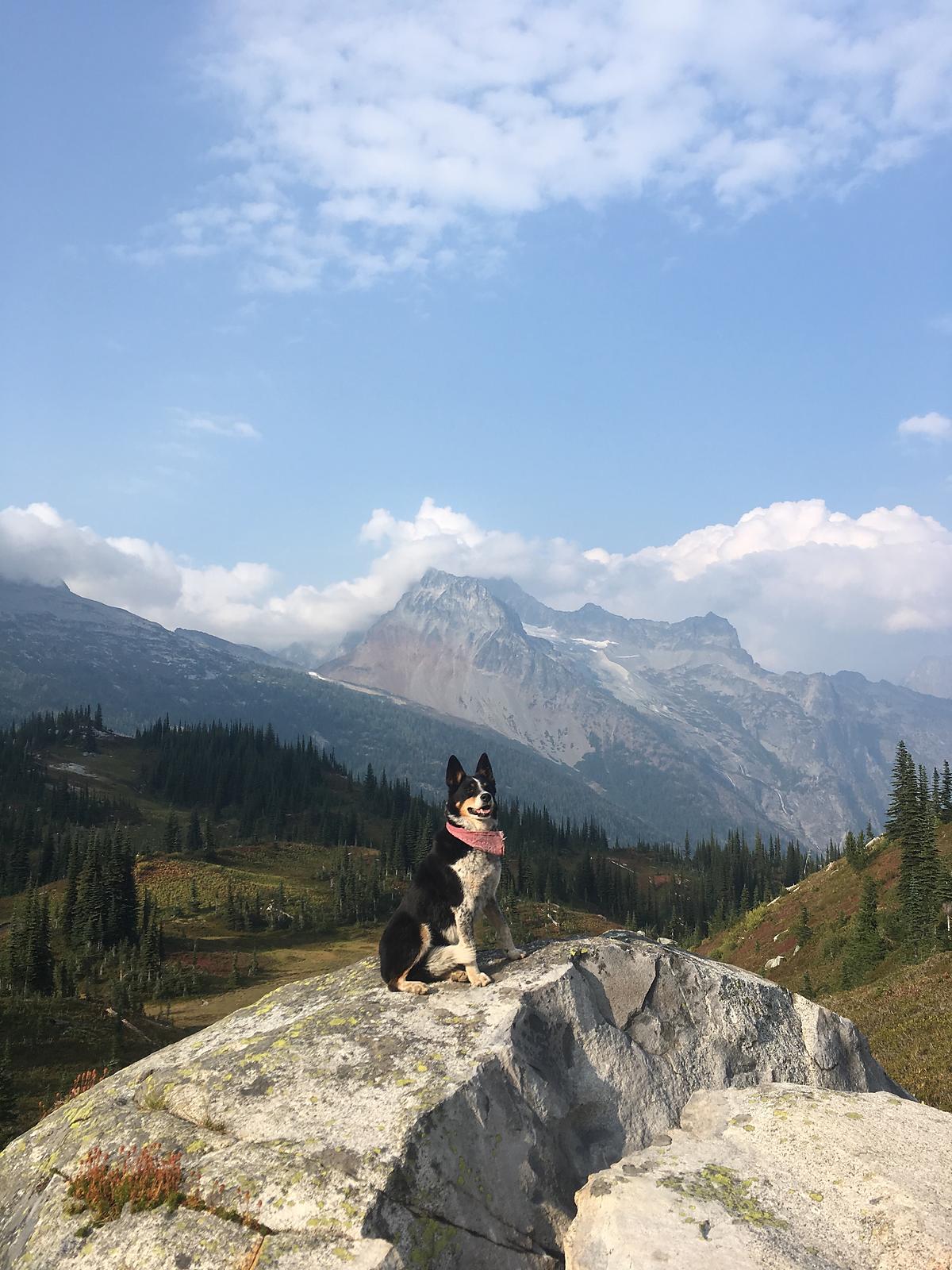 Langston, the chillest crag dog. Reed found his dog Langston while out on a hike when he was in high school. Since then, they've traveled the continent together. Click on thumbnails below for larger image. 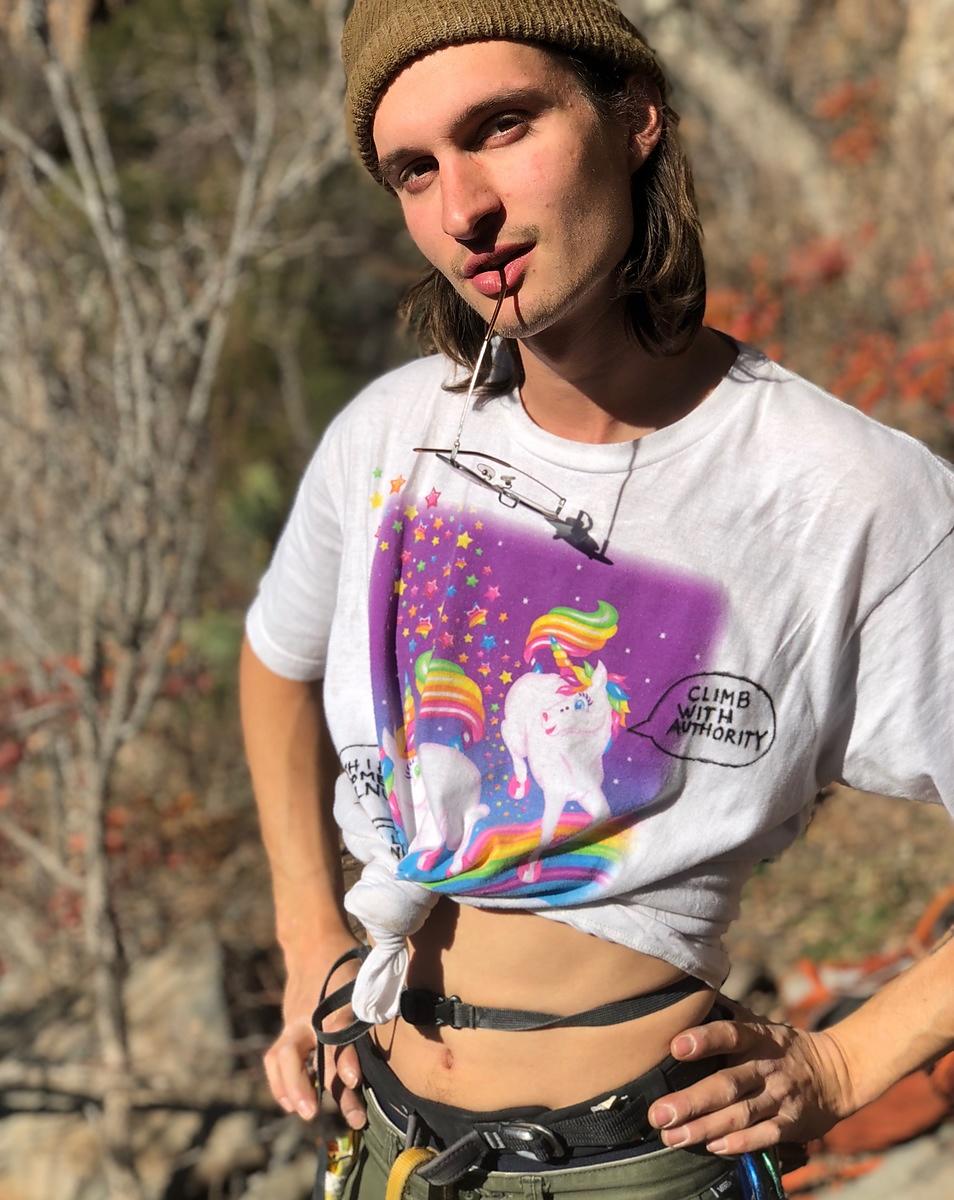 Sporting the shirt his friends made for him after his past winter send of East Coast Fist Bump, a 5.14 finger crack in Sedona, Arizona. Click on thumbnails below for larger image. 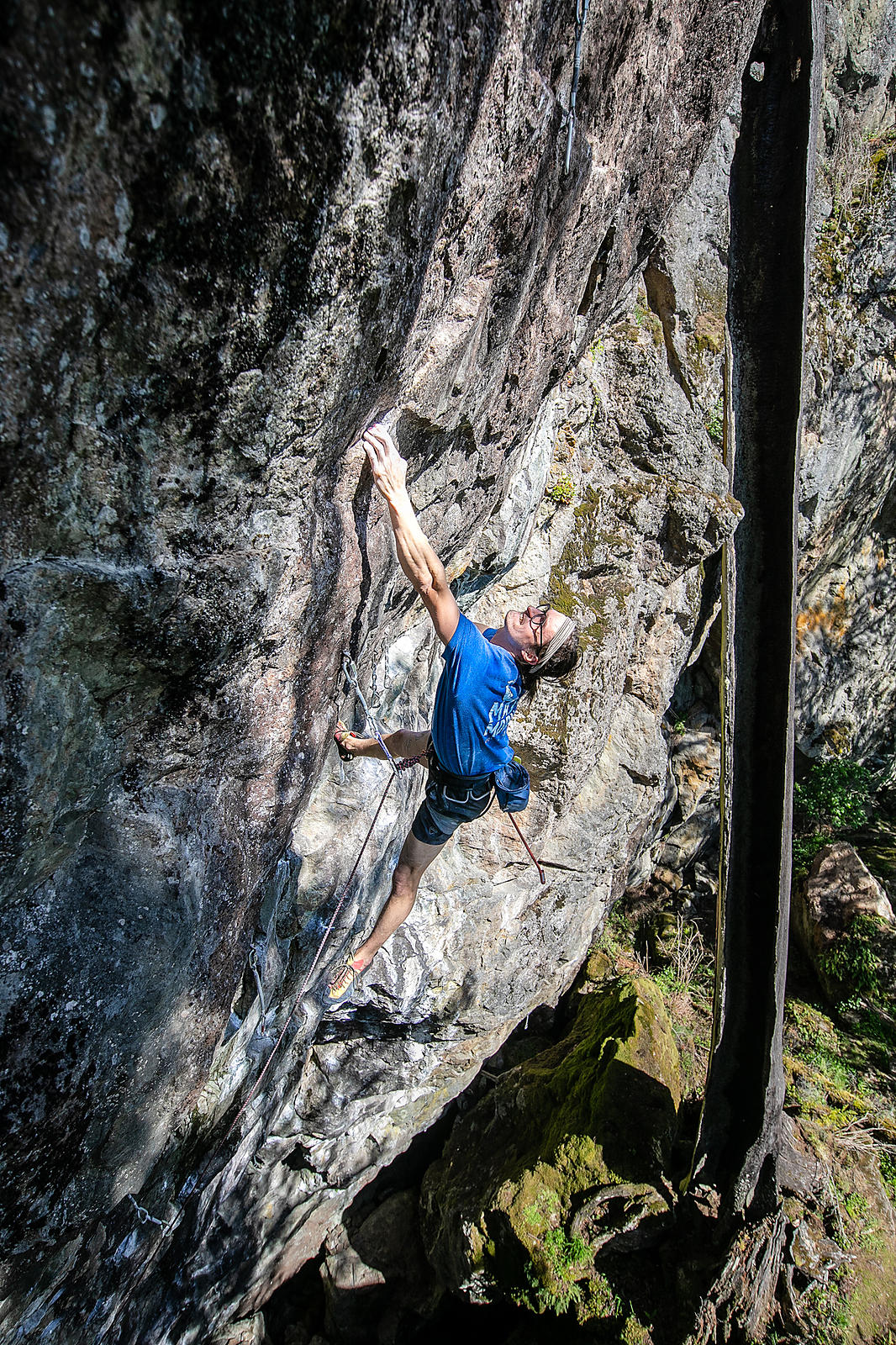 Sticking the crux deadpoint on his route, Papa Legba 5.14. Click on thumbnails below for larger image.

Earlier this year, with the guidance from friends Eric Hirst and Luke Stefurak, Reed took on the challenge of developing his first route. "I felt really lucky to be able to rap down a random spot and finding something right away. It was pretty cool to be challenged as my first route. It suited my style perfectly, it was like serendipity." In 8 short weeks of cleaning, bolting (while snow was still on the ground), and working the moves, he sent the line and named it Papa Legba (5.14).

When asked about what he learned through the process, he replied "it really made me appreciate people who put up routes. I've worked a lot of construction and labor jobs in my life- hanging on a rope and drilling into rock was really hard!"

Following up with the question of what his next project was going to be or any plans for the future, he said "putting so much work into that cave project really took a lot of time and commitment. I loved the experience and the process but right now, I'm pretty stoked to be getting out to other areas like Index and pushing myself to learn different styles. I feel so woke now after learning so much from Papa Legba!"

Reed currently lives in Seattle, focusing on climbing and his woodworking business. 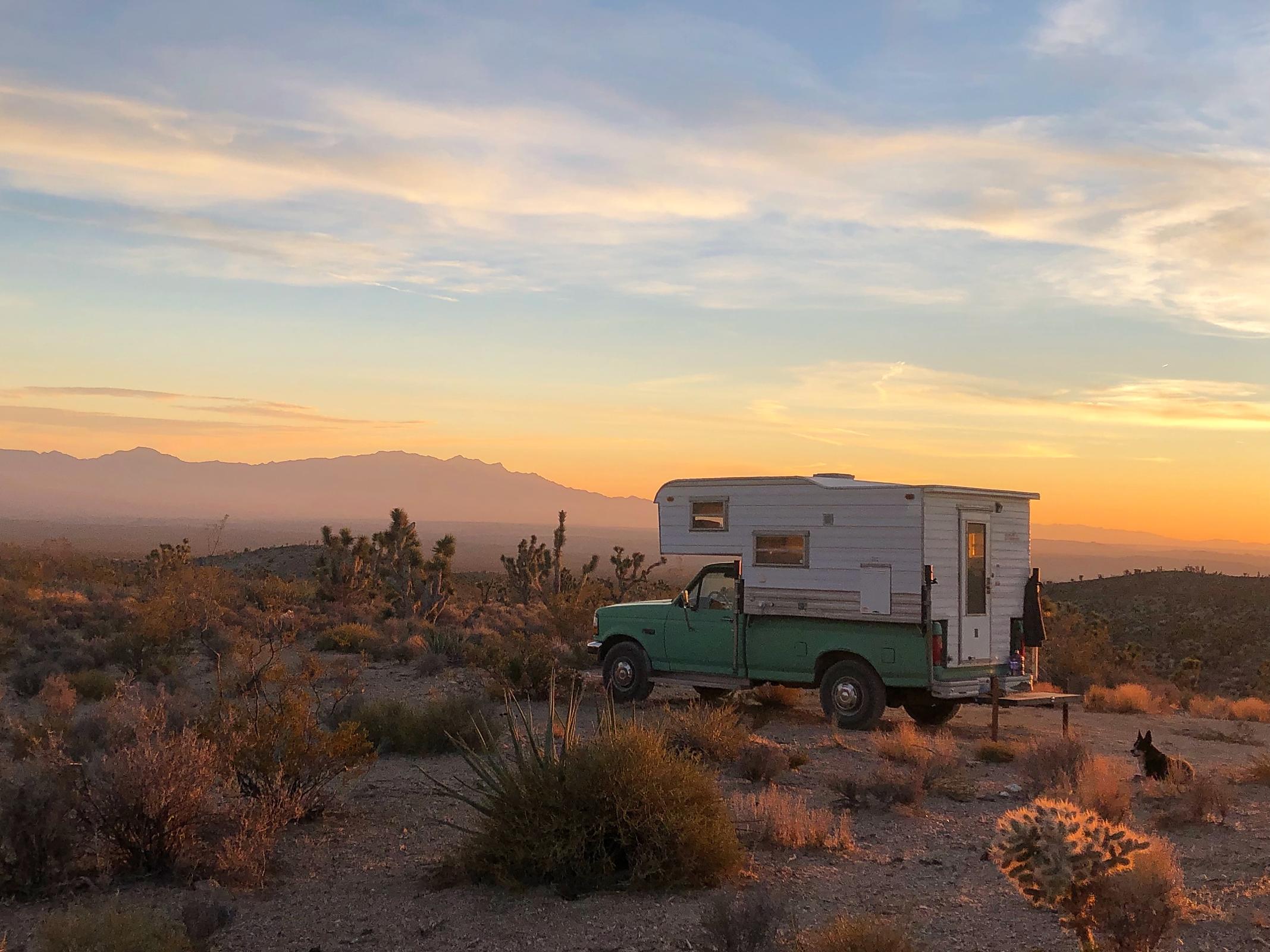 A recent road trip shot of Reed's truck and camper. Living the dirtbag life. Click on thumbnails below for larger image. 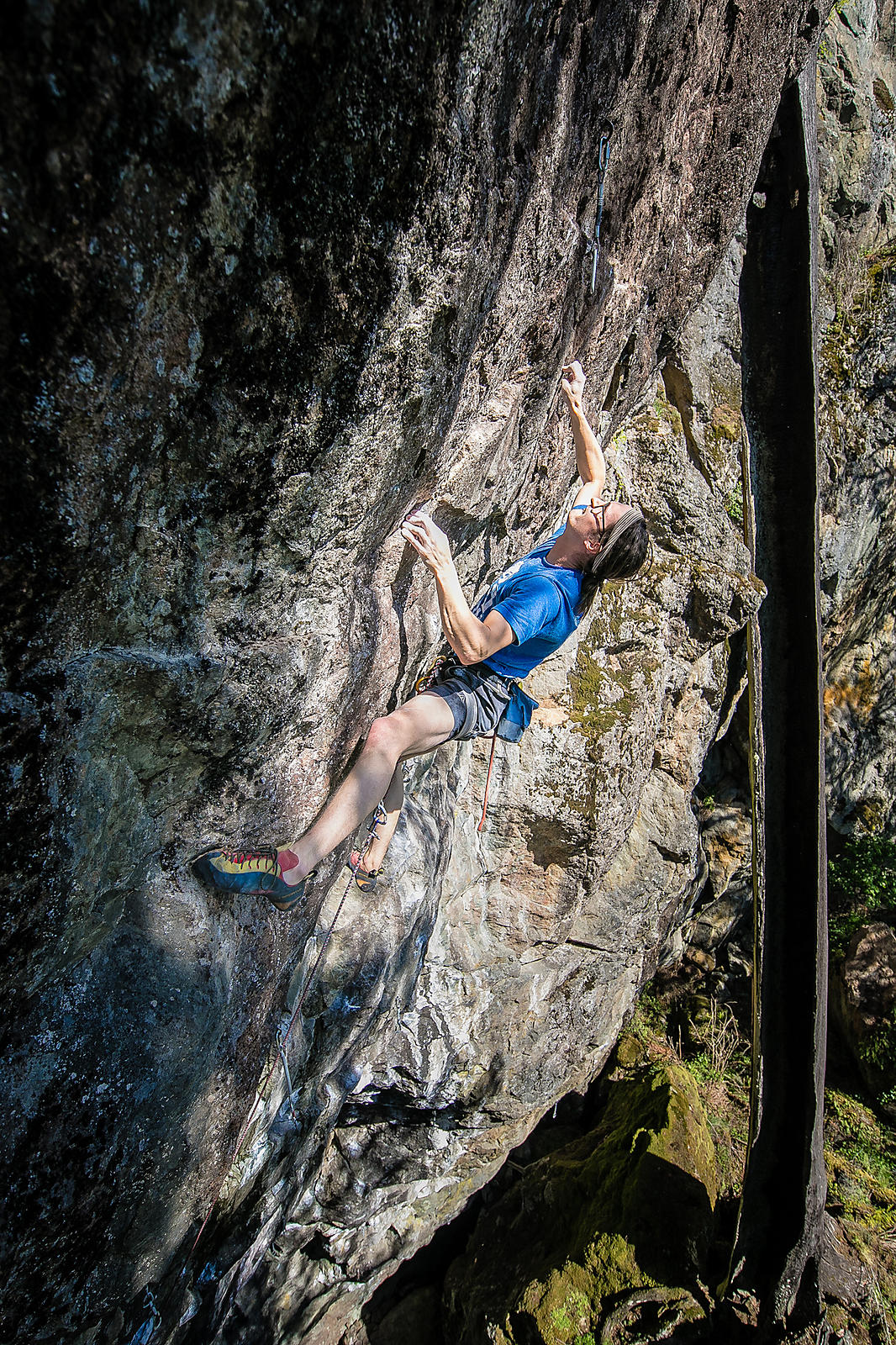 Heinous crimps and shitty feet. "It suited my style perfectly." Click on thumbnails below for larger image. 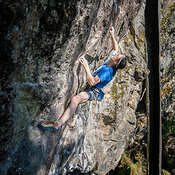 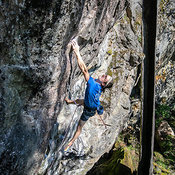 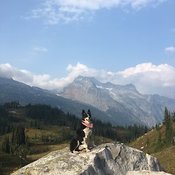 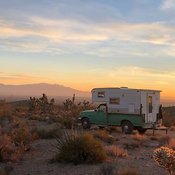 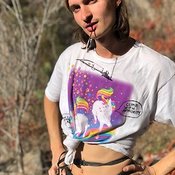